On 4th May 2018, Airports Corporation of Vietnam (ACV) successfully held the Annual General Meeting of Shareholders 2018. 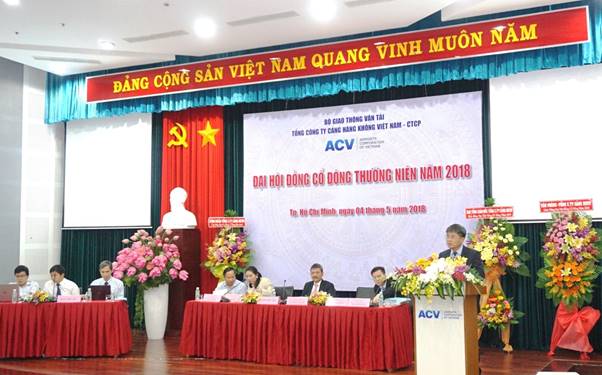 Mr. Le Manh Hung, General Director of ACV reported the business performance in 2017 and plan for 2018.

The General Meeting of Shareholders ratified the Meeting Minute and Resolution in terms of ratifying numerous contents as follows:

In 2017, under the guidelines of The Party, The government, Ministry of Transport and Civil Aviation Authority of Vietnam, ACV made great efforts in developing business operations, especially airports investment and capacity improvement. In addition, ACV successfully accomplished the objectives of business performance plan 2017; ensured air safety-security as well as the quality of passenger services due to not only the effective leadership of Board of Directors and Board of Management but also the continuous striving of ACV staffs. That actively contributes to the socio-economic development and national defense.

The objectives of financial operations of ACV soaked up that exceeded the anticipated number of 2017 plan. Following that, revenues reached 13.675 billion VND, over 110% planned; post-tax profit was 4.194 billion VND.